The Power of Politeness: Crafting a Positive Response to Conflict 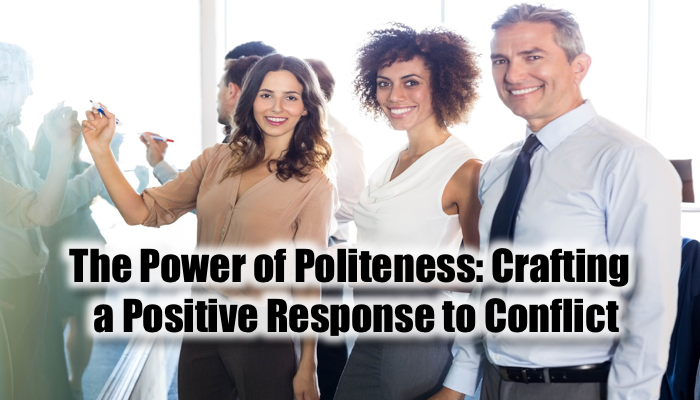 The Power of Politeness: Crafting a Positive Response to Conflict

If you’re like most people, every day you observe and encounter rude and impolite behavior. The endemic lack of civilly and rampant ungraciousness compounds stress, taking nerves to the razor’s edge. Everyone seems to be on a hair trigger to tell off a stranger or friend for a perceived rude action or trespass. It’s not nice.

Here’s the problem: when you lose your cool in front of someone who then decides to part ways, you’re undoing everything that the business has created. You destroy all that’s built with your blunt reaction, becoming a business liability and un-promotable.

You never know who’s watching and what decisions they’re making. I love the story about the young man who cut off a car to steal a parking spot that was obviously claimed by another driver. When confronted, “I signaled for that spot,” he told the driver in no uncertain terms what they could do with their signal and hustled off to his meeting… with that driver… who told him in no uncertain terms that they would never do business with him or his company because they never tolerate abuse of their good people.

How do you think he marked that lead in his CRM? “Deal lost because of my rudeness.” I doubt it. His manager never knew unless the prospect complained. In my book, that’s cause for termination.

How can we turn this around? Read on to discover how to regain control of your temper and make a journey to equanimity, politeness, and more business.

Most TV programming bases entertainment and humor on rude and impolite behaviors inciting the conflict that results in retaliation and revenge. While this makes for good story, it makes for bad real-world behavior. As a father of five, I observed that most children’s programming perpetuates poor politeness, the indoctrination of bad behavior starts early. You see it in two year olds and in 42 year olds.

When entertained, you watch professional actors, skilled in making you think their emotions are real, delivering scripted lines crafted by professional writers, skilled at keeping you engaged long enough to watch the commercial messages. Your favorite characters aren’t role models, they’re marketing machines. While the offended delivering a snappy comeback which withers the offender may seem clever, modeling any behavior demonstrated by actors shows a lack of maturity.

Gandhi got it right: “If we could change ourselves, the tendencies in the world would also change.” Choose a different response, one that moves the situation in the positive favor of both parties. Reciprocity goes both ways: people feel compelled to repay good deeds and bad. Repaying a bad deed with a good deed reverses the reckoning and the reaction.

Choose Your Personal Brand for Conflict

A recent dinner conversation consisted of 80 percent complaints about bad behavior and 20 percent about what people should do differently. No wonder the crowd ordered r of drinks to deal with the depression.

A well-known motivational speaker, published, polished, and professional on the platform, routinely vents on social media about his travel woes. The posts about his revenge for problems that aren’t sourced by nor responsibility of the front-line people he’s abusing, presents a mean and vengeful personal brand. In my mind, this dark side completely eclipses his positive platform persona.

I recommend a positive polite posting policy for social media. After all, you don’t want to offend a prospective business partner. Any complaint posts you see from me were from a less mature time when I used to say, “Don’t piss me off or you’ll become a case study in my next book.”

Design how you want to be viewed in conflict. This may be the most important career and relationship decision you make. How you respond — not react — to confrontation determines if you’re a worthy partner, promotable, and safe.

I’m not suggesting that you let people walk over you or that you allow yourself to be taken advantage of. But instead, how do you choose to respond in situations like that? Flying off the handle rarely gets what you want in real life. There are many other ways to resolve real damage.

Injured people tend to injure others. When someone is afraid, angry, or hurt, they tend to source from that state, responding in kind.

Start with compassion because we all need it. Based on the constant bombardment from negative conversations and bad-news media, most of us live in continuous fight-or-flight mode. Being compassionate for the state of others and your own state allows us to move to a less fearful place where we can begin healing. When they go low, you go high.

Offer the Benefit of the Doubt

Give someone the benefit of the doubt when they cut you off or don’t respond in the way that you think they should. Face it, you probably would have reacted badly, too, when in their state. They probably didn’t see you, were preoccupied, or angry and you just got a dose of it. It’s not personal. You’re not the source of their behavior, just within range.

The benefit of the doubt becomes more about your peace of mind then theirs. You can take on the injury or you can decide you’re uninjured. Which feels better to you?

Of course, if you’re observing repetitive attacking behavior, it may be personal, and you’ll choose a defensive position.

You can reprogram your badly-chosen reactions in six simple, but not necessarily easy, steps. It takes work to remove a deeply-rooted reactionary response, such as that modeled by a parent or other trusted person.

Step One: Take a few minutes to list how you were offended in the past 24 hours along with your reaction. For extra credit, think of a time when you were embarrassed by your behavior. Answer these questions about the situation:

Be honest with yourself because you probably feel completely justified in your behavior. Your model wanted to be right and you want to be more resourceful.

Step Two: Forgive yourself and your model for that behavior. In that moment, you thought it was the best choice. Now that you’re more mature, you choose a better response.

Say out loud, “I forgive myself and (model’s name) for that behavior because I now choose one that better represents the world I want to live in.” This makes room for your new behavior choice.

Don’t skip this step or you’ll stay stuck with your old behavior.

Step Three: Identify the alternative behavior that you’ll choose next time that situation arises. The goal isn’t to make them shrink back, but to shift them to a more positive, resourceful state.

Confronting an angry person about being angry makes them more angry. When they’re in a better state you can have the conversation about the cause of their anger and how to make a better choice.

Step Four: Identify the value of your new choice.

This step cements your motivation and makes your brain feel good about using the new choice.

This step installs the new response because you rehearse your new lines next time you play the role of dealing with a mad man. Rehearse until your response feels natural.

Step Six: Go forth into the world. You will be triggered. Rely on your instincts to revert back to your old behavior, so take a breath and deliver your new line. New behaviors require practice. Be patient with yourself because you’ll blow it during the reprogramming process. If that happens, restart with step one as often as you need.

I know, you’re thinking, “Rinse and Repeat.” If that’s what it takes to wash the bad stuff out of your head, do it!

Before you know it, you’ll be gracious and encounter much less rude behavior. And when you do, you’ll be unruffled and the model of equanimity, becoming promotable and sought after by powerful company.